Previous, Mike was chosen as the second drone, and he produced two sets of male twins with Nikki.

Stefan and Lakeisha are now pregnant.

Mike maxed out his charisma skill.

Wowsa, that’s a lot of cash for two gems. I love tiberium.

And she can now find even more gems! 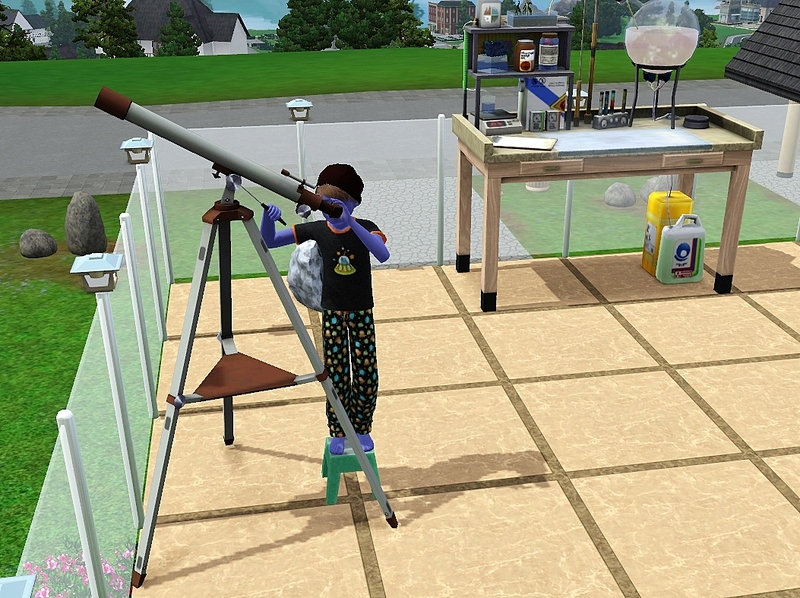 Ares keeps gravitating to the logic skilling items, so sure. 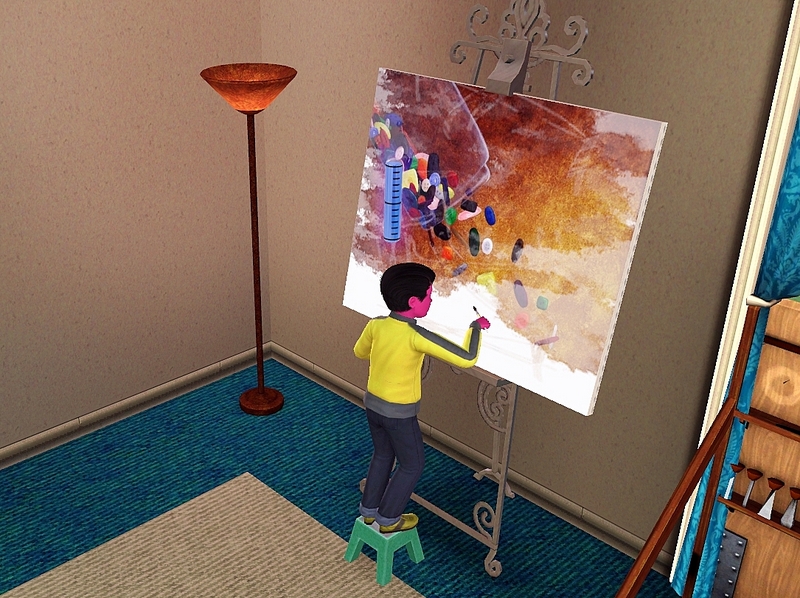 Chaos is having a grand old time painting. 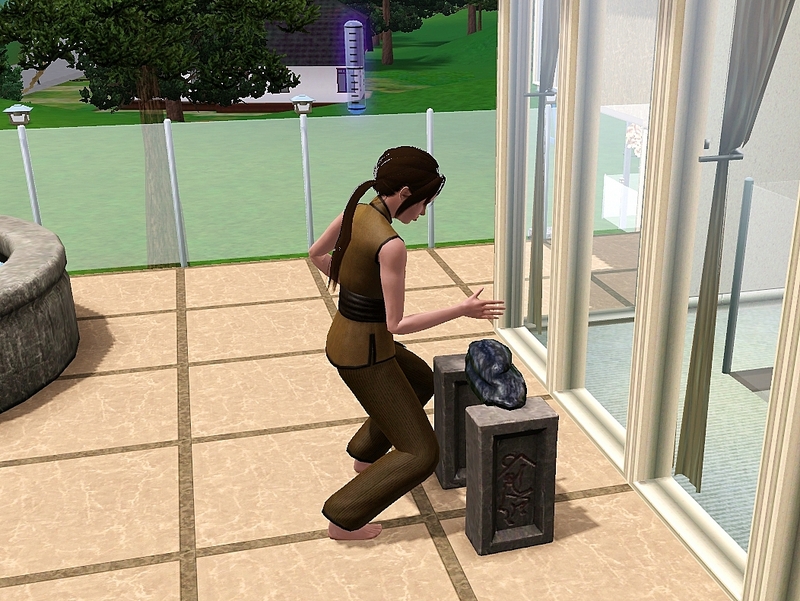 Nikki is only a brown belt, but already breaking space rock blocks.

The younger twins are onto the toddler books.

Mike earned himself a promotion

Martial Arts must stop for pregnancy.

So it’s inside to the easels. Because paint fumes are so good for the baby.
Yes, I had her eat a couple of watermelons, so we can hopefully get at least one girl.

Chaos’ new trait is Virtuoso. He has most of Mike’s features, with Nikki’s nose.

Ares’ is Kleptomaniac. He has Mike’s nose and eye shape, the rest is Nikki.

As befits his new trait, Eros is straight onto the computer.

While Apollo joins Ares at the chess table, courtesy of his wish to befriend Ares.

Felix finally has a romantic interest, Star Shue, who is one of my favourite premade teens.

And they have a baby on the way a second later.

Not to be outdone, Emilia and her beau are having a second child.

While Mike maxed out his guitar skill. And completed his LTW… which I think was Rock Star? Or maybe it was Golden Tongue, Golden Fingers.

Not sure where we got the harvester, but Mike is looking fierce. 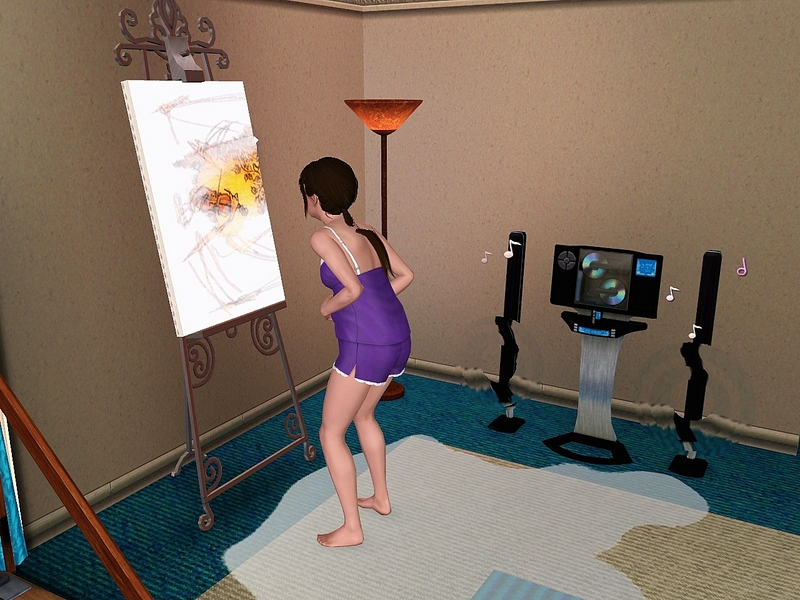 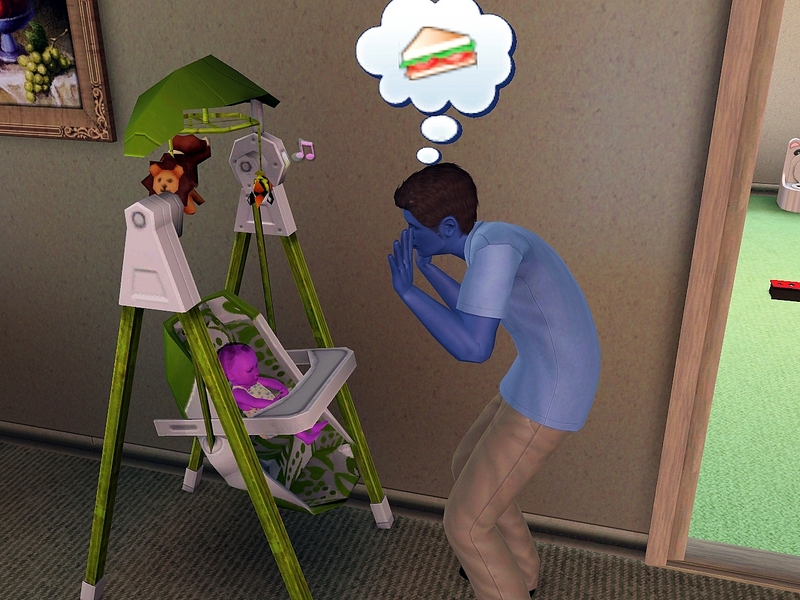 Mike is ecstatic with the new additions.

Felix and Star are engaged!

Not to be outdone, Stefan is expecting another baby.

Chaos brought this guy home from school, his name is Moshe Earthsong. He’s not exactly gorgeous, but hey. 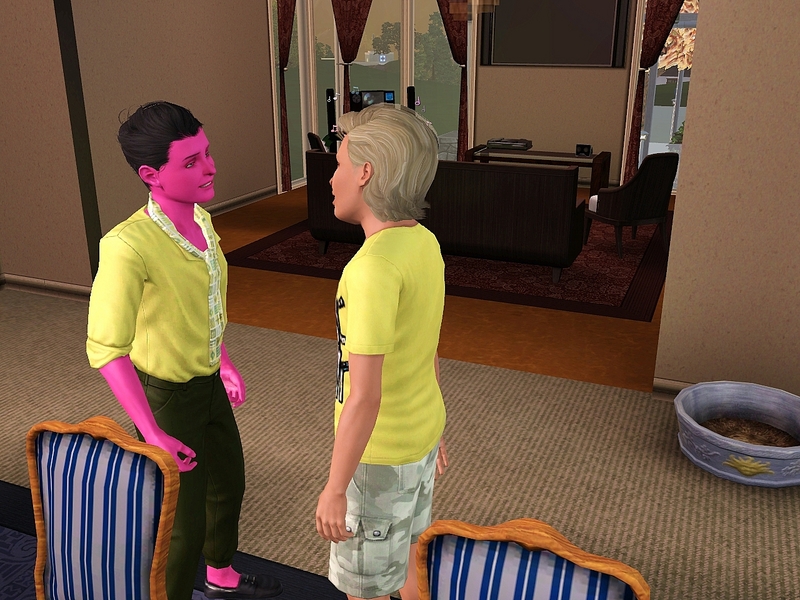 He’s gay, which is what Chaos is looking for. 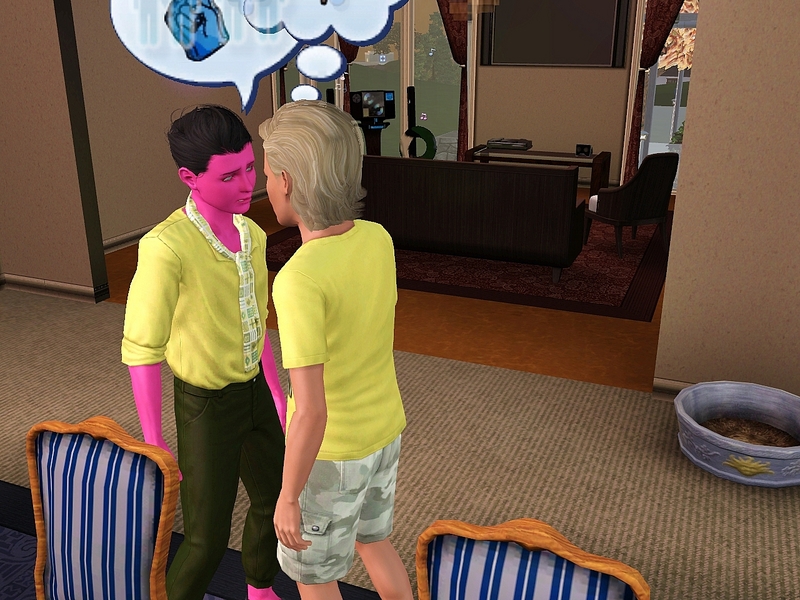 As is the invitation to prom. 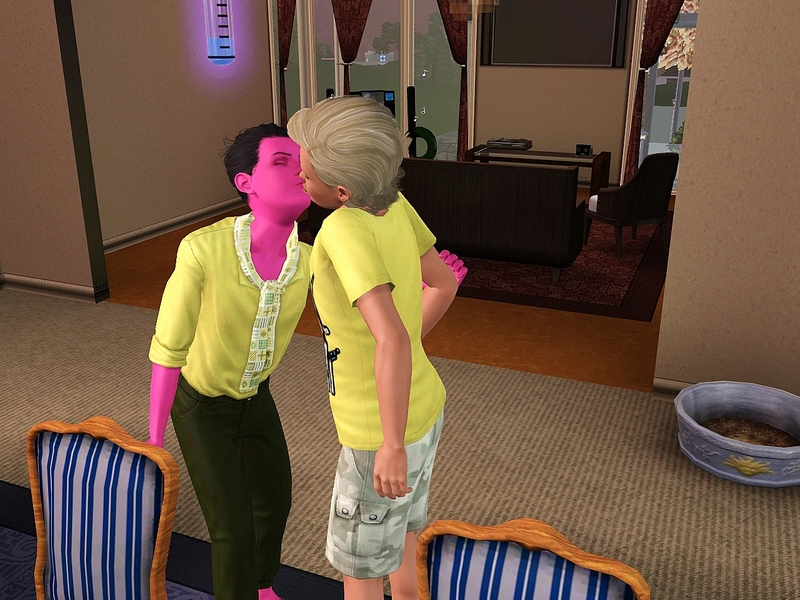 And we have a first kiss! Chaos is the first gay child… possibly because I only just changed my SP settings to have more gay and bi sims.

Felix and Star had a baby girl. The spelling of the name is going to haunt me, though. Melissa should be spelled with two s’s!

The next day, Nikki chats with Stefan.

Because the game decided he’s her boss. And she wants a promotion.

Mike maxed out the gardening skill. The drones and teens are doing most of the gardening these days; Nikki has better things to do. 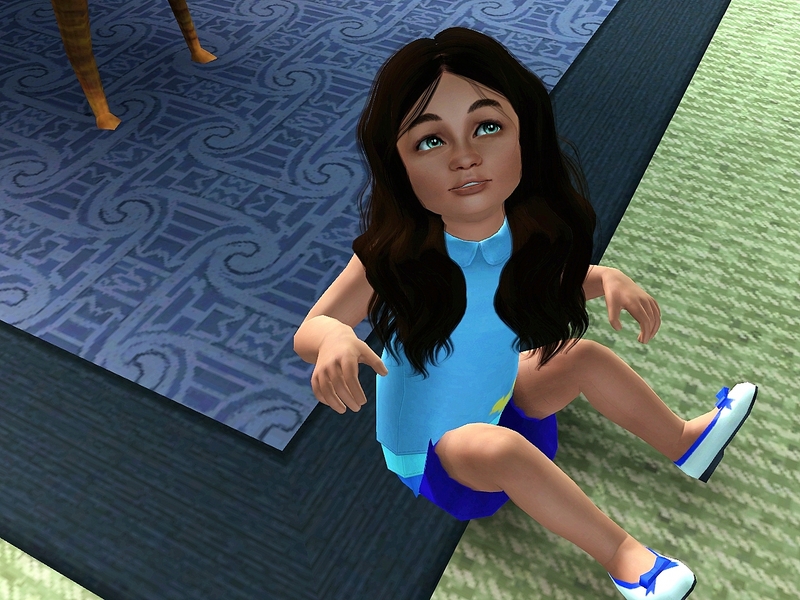 The last of Mike’s kids are toddlers! This is Victoria, who is almost a Nikki clone, except for Mike’s ears. 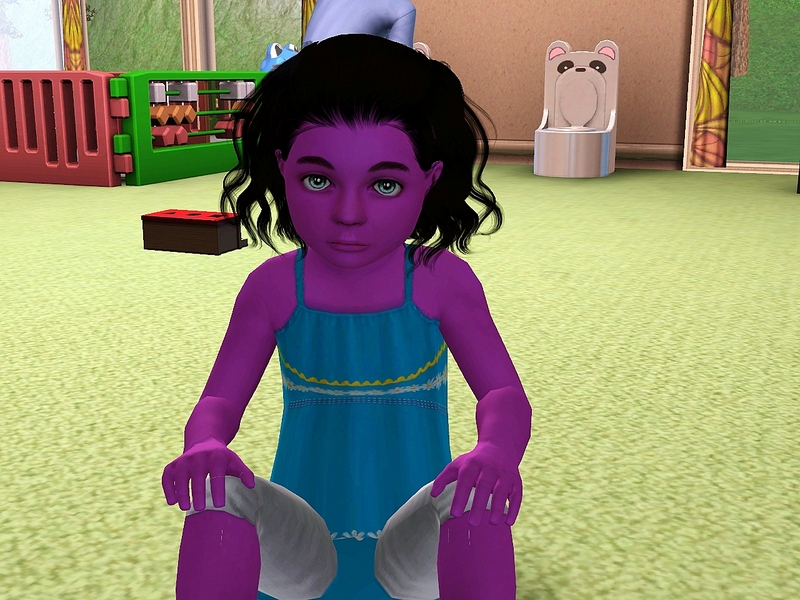 And this is Selene, who looks more like Mike. 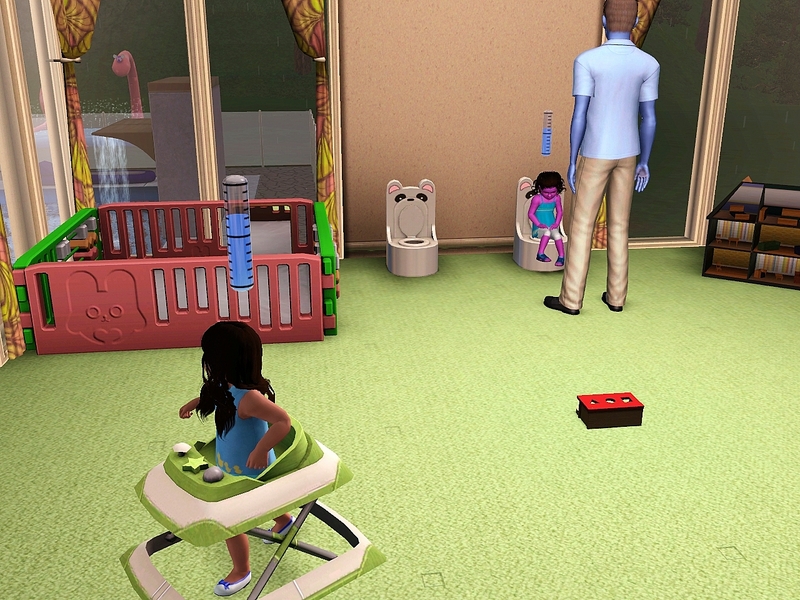 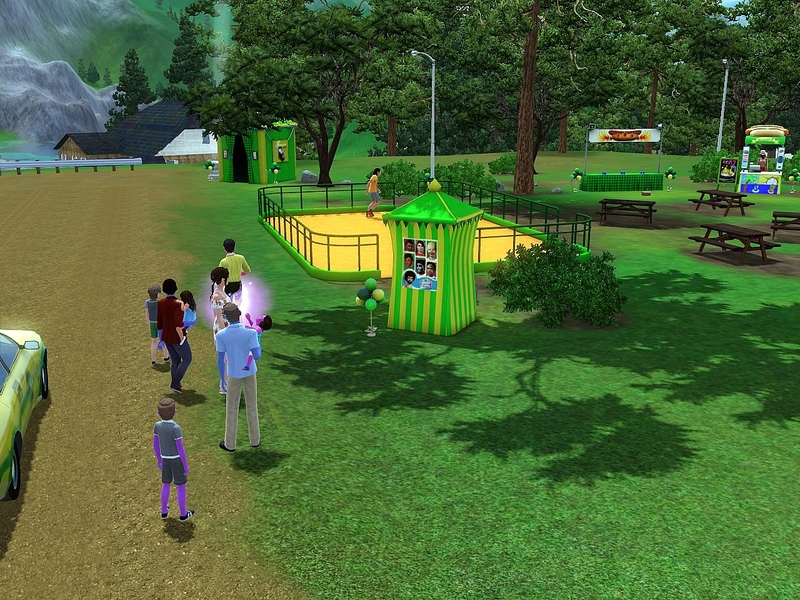 Just in time for Leisure Day! 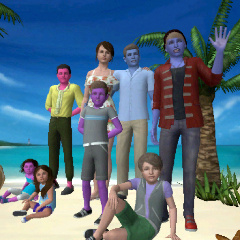 This is likely to be the last of Mike’s greeting cards.

Nikki sets off some fireworks.

Then she teaches Chaos to drive.

Ares gets his face painted.

More toddler training. Nikki rolled zero wishes for these two, so it’s all up to Mike.

Oh, Hannah is apparently gay as well. Who knew?

The updated greeting card wall. Pete seemed to have so much longer, probably because of Mike’s three sets of twins. 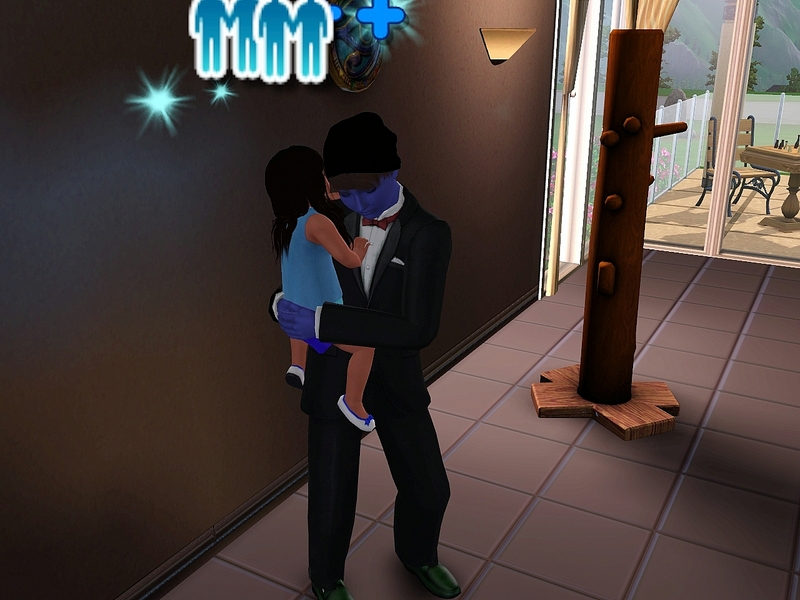 Ares loves the girls, he is continually rolling wishes for them.

Stefan had a baby boy.

Mike must have been promoted to Rock Star sometime and I missed it. But he’s helping Selene learn her xylo.

Various kid activities. Since Mr Computer Whiz Eros gravitates to the computer every spare moment, I put him to work on the writing skill.

The two As play chess together. Apollo now has a wish to be best friends with Ares, so we’re working on that.

Chaos is sticking to the drums.

The two younger boys also want to befriend one another. So Eros starts with a salute.

Then some shaka bra.

Apollo’s new trait is Loves to Swim, so he gets a surfer makeover.  He is mostly Nikki, with Mike’s eye shape.

Eros’ new trait is Clumsy. He has Mike’s overall face and eye shape, with Nikki’s nose and ears. 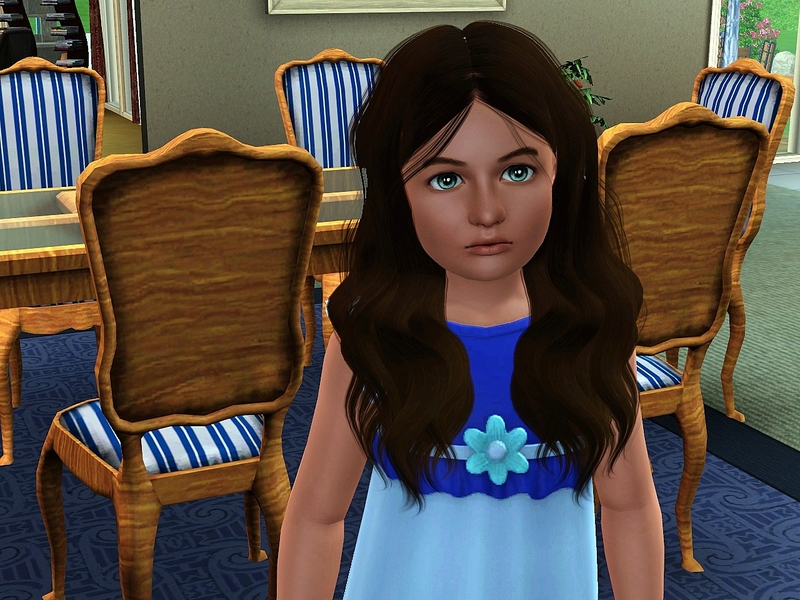 While Selene’s is Childish. And with their birthdays, Mike’s time is done!

Nikki remembers to break up with Mike before kicking him and the kids out.

She has five grandchildren now. The town is going to be overrun with Caetanos before long!